I picked a new template, after experimenting with about 5. That makes me realize how few templates there are available by default. That reminds me, not a lot of people read this blag anyways, so its a great way for me to futz with how it looks. Otherwise I am a strict believer in not changing the look and feel of any app in a short period.
Posted by Unknown at 7:45 PM 2 comments:

Firstly hats off to the first song which actually accepts the fact that if a person is upto some malice/ mischief we Mumbaikars tend to ask why the person is upto keedagiri.

Secondly this is basically the most quoted part of the Bhagvad Gita:
Thirdly, I still haven't gotten to see the movie.  Only the trailers. So even if 'the entire creation is his native place', SWMBO and I have been, sadly, not included.

Edit: was too sleepy to realise bad formatting.
Posted by Unknown at 11:03 PM No comments:

*Disclaimer: I paraphrase a lot of things from articles I have linked to. Any mistaken assumptions and errors are strictly mine. For the more technically and visually inclined follow the links. Also longish post.

Continuing to be the last person to comment on news after world+dog, lets talk about pubsubhubbub and the Push Button way of web.

Anil Dash has a good series of articles (1,2,3) talking about real time update technologies he calls PushButton. There are some really simple diagrams to explain the concept. It is actually a simple concept and has been floating around for ages, lacking the infrastructure and interest to move it forward.

Lets take an RSS feed. You download an RSS client or use an online client, subscribe to a list of feeds, rely on your client to periodically poll all the feeds and read the updates. A lot of criticism towards RSS has been directed towards the needless effort wasted on the polling and periodic updating which slows down things. A lot of polling by multiple clients is a waste of machine cycles. You potentially slow down other processes and burn a hole in the ozone. The other issue is updating - by having your client update periodically, you tend to loose out on immediate updates. If you set the update interval low, you end up using more machine cycles. This is pretty much the existing scenario for RSS subscriptions.

So whats the way out? Anil and a bunch of others are betting on something being dubbed PushButton Technology. The premise is this - your feed publisher indicates to your client that it can be obtained via an intermediary, generally called a 'hub'. Your client then goes out and registers with the hub (or multiple hubs) to receive updates. Here's where things are different - instead of polling the publisher periodically, the publisher updates the hub at any point of time an update is made and the hub PUSHes out the updates to the client. The interaction is almost instantaneous (especially for an online client.See very,very,very crude experiment here). There are some intricacies to this protocol, which I will touch upon later. But the end result is almost real time updates.

So who is implementing the three pieces of the puzzle - the publisher which can indicate a hub, the actual hub and a client which understands the hub? And how? There are actually quite a few resources. And most of them make use of - wait for it - RSS/ Atom. Another vindication of the truth that RSS is far from dead. Google is backing one of the major (and buzzworthy) approaches called pubsubhubbub. It relies on the 'link' element's 'rel' attribute in the RSS name space. Google is trying to standardize the protocol between the three elements, also called pubsubhubbub (guess why?:/). pubsubhubbub attempts to close pitfalls like hubs not being updated, in which case the client can directly call the publisher.

Another approach is RSS cloud. It has slightly different terminology and dependencies (the hub is called a cloud, it uses the cloud element in RSS namespace, the cloud is hosted on Amazons cloud not on Googles and so on) but offers the same real time capabilities. A special mention to Dave Winer who is an originator of this idea - he was one of few that had proposed this way back in 2001.

So what is exciting here? Real time updates of course! Well, almost instantaneous in any case. Not only that but also the advantage of avoiding "lame polling". And remember - RSS is just a syndication format. It does not have to be only for your Twitter updates (they have their own protocol for instant updates which they don't share btw), your rants on why other people write bad posts or all the important information about Bhajji slapping papparazi. It could be for (facebook?) game moves, live blogging, cricket scores (aargh... rediff page reloads) - any time of real time messaging. Decentralizing the message passing might actually be the answer to preventing twitter-like services from being overwhelmed - remember you can link to multiple hubs and potentially cycle through them (based on client location?). Plus the protocols are open and rely on open format XML formats - that gets extra love. Google has gone the extra mile by ensuring that Google Reader can understand hubs and also shared item feeds now come with a link to the experimental hub. Feedburner is also almost ready, though this feed does not have the hub linked.

That is not to say its all smooth sailing. Eric Smith correctly points out problems and notes how this is after all only a gigantic hack. There are also teething issues with making new hubs. And competing ways to work tend to fragment early adopters. Another real problem is lack of RSS  adoption - with little understanding among the mass about the RSS format and little inclination towards experimentation, things might take some time to roll out. There is also, in my mind, very little appeal to real-time updates - a person can follow only so many people at the same time. Whatever we piggyback on top of existing technologies, acceptance by the existing tech community will probably be very slow.

Plus my office is probably going to ban the hub when it becomes popular enough. So, excuse please.
Posted by Unknown at 10:54 PM 1 comment:

This is a completely bogus entry which will be updated with screen grabs from the hub run by the good people at Google. 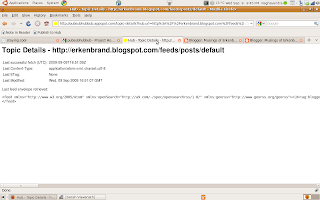 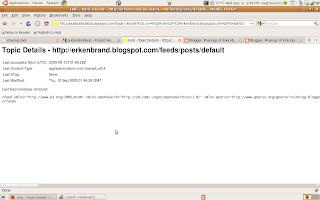 It is primarily a silly exercise, but I do want to test the time it takes. for the update to fly.

Edit post update - It was instantaneous. Really. I think it took 2 seconds. Probably because of all the time it took me to move my mouse to the tab and hit the refresh button.

Reminder to self - try with other peoples feeds.
Posted by Unknown at 8:46 PM No comments:

... improve writing style or the 28 people who came to read the RSS article from twitter will not turn up again.
Posted by Unknown at 11:51 AM 1 comment:

There has been a lot of speculation here and here on how RSS is dying. Or indeed dead already. The gist of the argument is that it is a Web 1.0 idea which was good at a time, never took off and pales in front of the more recent, Web 2.0 social network innovations like Twitter and Facebook which more then effectively replace RSS. The number of people actually using RSS is also pretty less - one of the links mentions a Forrester study.

I have had my problems with RSS feeds. I actually gave up on RSS completely for a while and moved to StumbleUpon for a significant amount of time. The reasons are pretty much what you will have read - too much clutter in feeds, a disconcertingly big backlog, indiscriminate posting by news outlets and so on. But once I figured out Google Reader, Yahoo Pipes and topic based distribution sites, RSS has come back into my life.

I find it difficult to believe that RSS is dead. To state the obvious, it is a syndication format, not an opinion piece. It is not the news, but the news carrier, if you will. I find it much easier to consume, organize and follow than a very rambling and noisy Twitter list.There are enough ways to filter your feeds to keep out the unwanted and keep in the sufficient. There is more mojo with RSS which you can read here and here. In short RSS based feeds are easier to consume, organize and make sense of in any quantity compared to the high noise social outlets.

Its actually my main learning tool at this time. InfoQ, IBM Developer Works, DZone and quite a lot of outlets have multiple writers posting new articles and walkthroughs. I find it easier to select a limited number of subject-specific feeds, organize them in an easy-to-understand order,pick up a new topic, jump to it, and go through it. Do I have a large backlog - yes, I do, but I also have more leisure in selecting the right topic for me and working from there. In all fairness, Reader has been a valuable tool making my work much easier.

Here's one other thing that I use rss feeds for - automated messages from my Continuous Integration Server, Hudson. I don't need to keep a window tab open to keep an eye on my different builds, I just follow a feed. Which brings me to the real reason I rely heavily on my Reader feeds - enterprise policy. I work in a big corporate and like most it locks down Gmail, Facebook and Twitter among other sites - something about lost productivity. But that still leaves me open to aggregating feeds via Reader. It is also easier than opening multiple tabs and relying on going back and forth and keeping track of what you were doing. Most of the commentators I linked to probably do not work in such locked-down environments, more power to them. But I do and that makes RSS more flexible and simpler to use.

Twitter is an awesome service - barring the spam, the self-promotion and the almost always irrelevant tags used to push oneself up to the top of the latest results for something or the other. I don't dismiss twitter - I follow a couple of good sources on Reader and Twitter. But organizing Twitter is not very easy for me to understand, and I am still working out a few visualization ideas. Lets see where that goes. Maybe later on this...

I still don't think RSS is dead. All the reading I did for writing this actually strengthens my feelings.
Posted by Unknown at 7:23 PM 2 comments:

Ganpati Bappa Morya. Pudhchya Varshi laukar ya.
Ganpati Visarjan is one of the things I miss the most. Maybe next year...
Posted by Unknown at 9:19 PM No comments: